The below graphic walks through the model and what has happened since 2015. 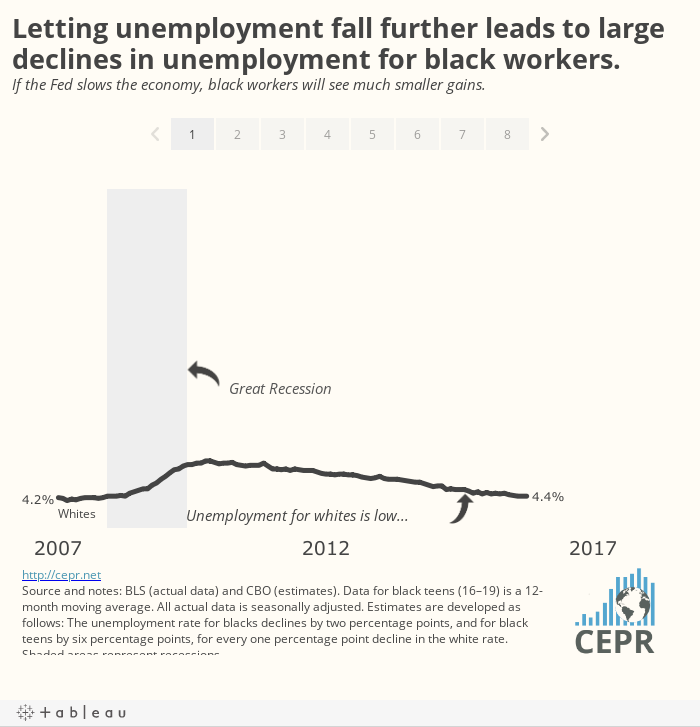 These results are important in the context of discussions around full employment and interest rate hikes. In the past, most economists believed that the labor market was at full employment at around 6.0 percent unemployment. Below this point, they thought, inflation would rapidly increase to a degree that would cause problems for the economy. Today, many acknowledge that unemployment can fall below 6.0 percent without creating accelerating inflation. However, many still believe the current unemployment rate of 3.9 percent is about as low as unemployment should go.

There is a cost to these beliefs, as this model has shown. If the economy is deliberately slowed, by, for example, the Federal Reserve raising interest rates, the people that lose out the most are those who are at a disadvantage in the labor market, like black teens. Many of these same groups were also those hit hardest by the Great Recession.

In part because the Federal Reserve has been somewhat cautious about raising rates since 2015, there are over 1.5 million more employed black workers (89,000 of which are teens). If unemployment is allowed to fall further, and President Trump doesn’t derail it with his policy agenda, the benefits will continue to disproportionately accrue to those who have been left behind by the economic recovery following the Great Recession.

Given that inflation is still low, it suggests that there is still room for the economy to improve and for these workers to find jobs. Inflation fears and old ideas about the unemployment rate shouldn’t stop them.