As third-quarter reporting season approaches for automakers and suppliers, analysts have been shaving earnings forecasts for a group that has already been slammed by profit worries and trade war concerns.

Morgan analysts said they remained cautious on autos and were trimming forecasts and price targets after weak third-quarter China auto shipments data. The firm’s analysts warned that the Chinese government stimulus in the next year may be the biggest driver of earnings and stock prices in the next six to 12 months.

Overall trade worries also continue to weigh on the group. On Tuesday, Goldman Sachs economists said there remains a 35 percent chance that global auto tariffs could be imposed on the sector, and a Commerce department recommendation for tariffs is expected at some point after the midterm elections. The structure of the revised trade agreement with Mexico and Canada suggests the White House is considering higher auto tariffs. 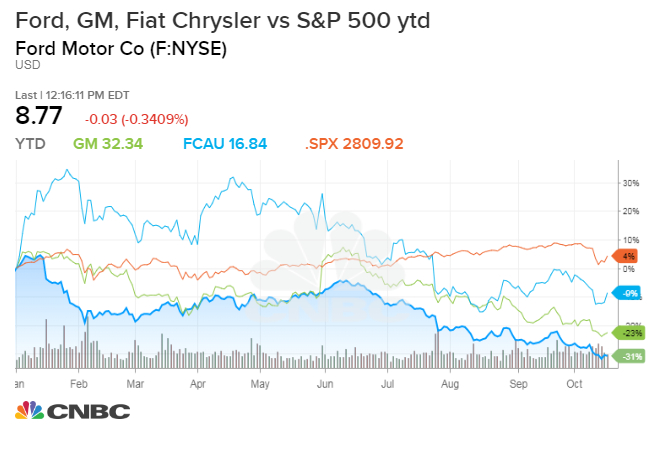 Analysts have also been chiseling away at earnings forecasts for auto suppliers.

Wells Fargo on Wednesday took the knife to its forecast for auto parts EBITDA by 4 percent, with the biggest adjustments to Visteon, which slumped nearly 5 percent at one point, and Adient, also off sharply. For 2019, Wells analysts cut EBITDA by 3 percent and assumed almost flat global production at 1 percent.

However, Wells said that the median group multiple is now at a 5-year low and the stocks have discounted much of 2019 risk. Visteon and Adient would have the most earnings risk should China worsen.

As for Ford, Morgan said third-quarter China volume appears down 40 percent, and it lowered third-quarter earnings to $0.28 per share from $0.32. The analyst said they trimmed fiscal-year numbers by 4 percent to $1.22 per share, below the company’s guidance of $1.30 to $1.50. The firm chopped fiscal 2019 by 17 percent to $0.82 per share, noting its forecast is nearly 40 percent below consensus.

They pared their Ford stock target to $14 from $15. Ford reports earnings next week, and GM reports the following week.

They did not cut the target for Fiat Chrysler stock, but lowered earnings estimates for the fiscal year by 1 percent and fiscal year 2019 by 2 percent. The analysts estimate Fiat Chrysler China venture sales volume was down 35 percent year over year.

B. Riley FBR analysts also wrote on auto suppliers, noting that some stocks have become attractive after a sharp sell-off, and they mention Gentex as a top pick. They said suppliers have been hit since late August when Continental AG cut guidance and industry performance in China and Europe became more challenging.

Car sales have also been weaker in the U.S. with Ford and GM both down double digits in September.

“… We see several compelling buying opportunities at these levels. Since August 21, we estimate that U.S. auto suppliers are down 11.2% vs. the S&P 500 up 2.2%. A string of unfavorable guidance revisions from major auto companies has compounded pressure on the group from uncertainty over the impact of global trade tension and lingering concerns about the sustainability of U.S. SAAR have likely been a headwind as well,” according to B. Riley. “We are revising 3Q18 estimates in accordance with mixed demand dynamics in certain regions, but we remain positive on particular secular growth themes in the auto space including auto tech adoption and vehicle lightweighting.”