Nobody knows when the next recession will come, but it will hit eventually. Dorman Products (DORM) is a good recession stock candidate. The company manufactures replacement auto parts that are sold at retail by stores like AutoZone (AZO) and O’Reilly Automotive (ORLY). The parts are sold under brand labels owned by Dorman and under store brand labels in some cases.

Revenue growth has slowed to mid-single digits in recent years after hitting the high teens between 2010 and 2014 in the wake of the financial crisis, which led to depressed car sales and strong growth in the automotive aftermarket. As whispers of a potential recession grow, and as cars age, the market opportunity for Dorman will become brighter. The company looks like a value in the $60s after peaking in the low $80s earlier this year.

Q2-18 revenue was up 4%, continuing a mid-single digit growth rate that we saw in 2017. While 4% growth may appear anemic, I think we’re scraping the bottom of the barrel on the worst that Dorman can show us on revenue growth. Dorman claims to be the leader in producing generic versions of “dealer exclusive” parts. Dorman designs its products inhouse and outsources the manufacturing. Dorman products are sold in major aftermarket retailers like AutoZone, O’Reilly Automotive, Advance Auto Parts (AAP), and NAPA Auto Parts. 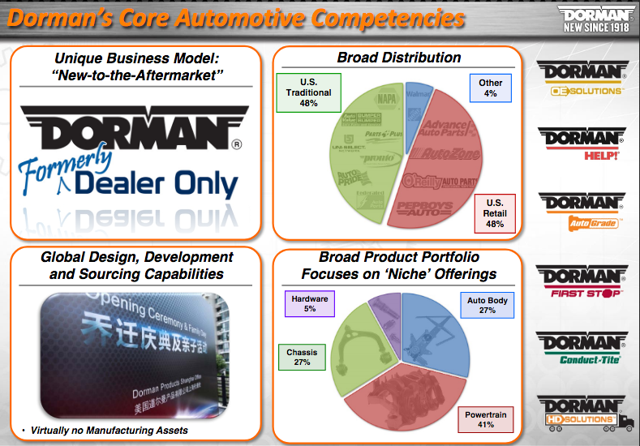 Source of Dorman Revenue Growth Rates: Calculated by author by reviewing 10-Ks dating back to 2008.

As Dorman’s revenue growth has slowed, car sales have continued to tick upward and have leveled off in the 17 million-per-year range.

Source: YCharts, which aggregates sales data from the federal government.

Though the company does not conduct earnings calls, it does issue a press release along with its quarterly SEC filings. In the Q2-18 press release, the company noted that it launched 1,534 new SKUs. This has been a continual driver for the company – developing new car parts to generate demand and drive sales. As of Q4-17, the company distributed 216,000 different SKUs vs. 133,000 in Q4-12. That’s a catalogue increase of 62% in five years, which has come through a combo of internal engineering efforts and acquisitions. 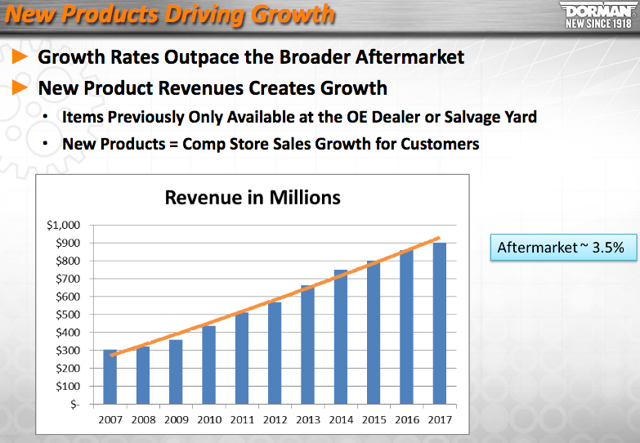 “We launched 4,079 new SKU’s in 2017 ensuring that our future growth prospects remain strong. Sales from new products launched in the last 24 months represented 18% of our total sales in 2017, which is up from 17% in 2016, showcasing our healthy new product pipeline.” – Matt Barton, Dorman Products CEO, Q4-17 press release.

The company believes it is in a position for market-beating growth in the years ahead. Any recession aside, the company expects growth to result from the aging of cars on the road. The average age of vehicles is increasing. 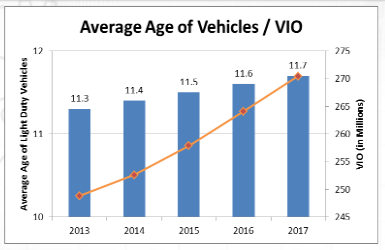 In addition to the above graphic, a 2016 article by Automotive News cited research that showed the fastest-growing age group of vehicles on the road through 2021 were those 16 years or older. The number of old cars on the road was expected to increase from 62 million in 2016 to 81 million in 2021, an increase of 31%. The high quality of vehicles is a reason cited for the improving lifespan of cars.

“…we remain bullish on the Automotive Aftermarket despite slower market growth in 2017. We believe the market fundamentals remain strong. Miles driven are up and are expected to increase, gasoline prices remain relatively low and the pool of cars aged 6+ years is expected to increase going forward. Our strategy of developing New to the Aftermarket parts will continue to enable our customers to achieve year over year sales growth while offering the end user a high quality alternative to the OE (Original Equipment). We believe that this, combined with other growth initiatives, will enable us to grow at a faster rate than the overall (aftermarket growth of 3.5%/year).” – CEO Matt Barton, Q4-17 earnings release.

Though Dorman expects to exceed 3.5% annual growth for the foreseeable future, the company doesn’t come without risk. If something causes gasoline prices to skyrocket, this could dampen Dorman’s growth prospects.

Additionally, one day, if autonomous/electric cars become a common aspect of everyday life, there will likely be fewer internal combustion engine cars on the road. That will eat away at Dorman’s addressable market. Internal combustion engines are complex and have more than 1,000 moving parts. Electric vehicle engines have about 20. A world dominated by electric cars would presumably mean much less opportunity for a company like Dorman.

There are also concerns aftermarket retailers could lose market share to Amazon (NASDAQ:AMZN), which participates in the aftermarket today. The aftermarket is valued at $46 billion, which gives Amazon plenty of incentive to pursue a greater share of the market. Additionally, Amazon has made headway by selling its own generic versions of consumer products to take market share from popular brands. Could there be a scenario where Amazon competes with Dorman in creating dealer-exclusive car parts? It’s possible. However, Dorman is the leader in this area and doesn’t yet generate $1 billion in annual revenue. The complexity of designing and making 200,000+ different auto parts may be more trouble than it’s worth for Amazon.

The company looks undervalued on a discounted free cash flow basis. Dorman has grown free cash flow at an average annual rate of nearly 15% over the last decade. Applying a discount rate of the 30-year US Treasury (3.36%) and a 3% perpetuity growth rate after year 10 gives me a fair value north of $100 (vs. high $60s price as of this writing). I don’t use a discount greater than the 30-year rate because I don’t add a risk premium to the discount rate. Other investors do, and there are multiple ways of coming up with a risk premium. However, I prefer to use the 30-year as a guidepost and then seek a discount I am comfortable with based on the company in question.

Dorman does not pay a dividend.

Based on the above data, Dorman looks undervalued. But the investing time frame probably matters here. Do I intend to buy and hold Dorman forever? I don’t know how to do that given the uncertain future of cars in this country. Is Dorman a good buy and hold over the next 5-10 years? Probably.

Dorman may be a good value. Cars will continue to age due to higher quality vehicles on the road and Dorman will likely benefit. Dorman thrived in the wake of the financial crisis and any downturn in the economy may also benefit the company again. However, the future of the internal combustion engine long term is in doubt and this could potentially affect Dorman’s business prospects. This is a factor in determining how long to buy and hold Dorman. I am not a buyer at this time as I weigh my investing options, but may add a position in the coming months.

Author’s Note: Please do your own research before investing.

Disclosure: I/we have no positions in any stocks mentioned, and no plans to initiate any positions within the next 72 hours.

I wrote this article myself, and it expresses my own opinions. I am not receiving compensation for it (other than from Seeking Alpha). I have no business relationship with any company whose stock is mentioned in this article.