It’s easy to identify funds with strong records. But as my colleague Russ Kinnel noted recently, it takes more than a strong record to earn a Morningstar Analyst Rating of Gold, Silver, or Bronze. Those medals reflect our expectation that a fund will be a standout performer in the future, and that requires a deeper investigation into a fund’s fundamentals to determine whether it has a sustainable competitive advantage. If our analysts aren’t convinced that a fund can continue to deliver strong results, they’ll assign it a Morningstar Analyst Rating of Neutral or possibly Negative.

When a fund with a great record earns a Neutral rating, we get questions. In the world of bond funds, the reason our analysts take a skeptical view of past performance often comes down to risk. We ask ourselves the following questions:

Risk is an especially critical factor to consider today, given that the last time the bond market experienced a broad sell-off across sectors was during the 2008 financial crisis. Now that we’ve passed the 10-year anniversary of Lehman Monday, financial crisis market stress is on the verge of rolling out of funds’ 10-year trailing records, an arbitrary but nonetheless standard period over which investors assess long-term performance. Meanwhile, several years of extraordinarily accommodative global monetary policy has suppressed yields on high-quality bond sectors and pushed investors into riskier sectors in exchange for incremental yield. As a result, the dominant trend over the past five years of gradual economic recovery and low default rates has been to reward risk-taking–the more the better.

The following table shows that the bond market’s riskiest sectors have also been its highest returning over the trailing three, five, and 10 years through Sept. 30, 2018. Adjusting those returns for volatility (Sharpe ratio) corrects for that somewhat, particularly over the past decade, which includes 2008’s painful final months. But as 2018 rolls out of the sample, the riskier sectors appear quite strong even on a volatility-adjusted basis. 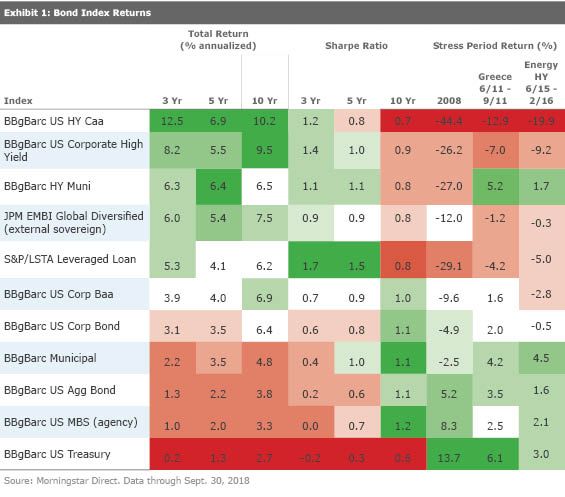 Nevertheless, during periods of acute pain for credit markets, these same sectors have suffered significant downdrafts, as demonstrated in the table above. In addition to 2008’s financial crisis, I’ve shown bond sector returns during two subsequent credit sell-offs: contagion from the Greek government debt crisis in 2011 and the energy-sector-led high-yield sell-off from mid-2015 through early 2016. That’s worth remembering in this late stage of the current credit cycle.

The funds discussed below are all examples of bond funds that have posted impressive returns over the past several years but earn a Neutral Analyst Rating. Here’s why.

Thompson Bond (THOPX)
Thompson Bond was a small fund until after the financial crisis, when it began to see large inflows. Investors were attracted by the fund’s plump yield, which came from its sizable stake in corporate bonds, especially its concentration in BBB rated corporates (typically above 70% of the portfolio). Amid a friendly climate for risk-taking, the fund grew from $45 million in assets at the end of 2008 to a peak of $3.7 billion in late 2014. Unfortunately, the fund’s appetite for risk stung when oil prices plummeted in late 2014 and 2015, causing the fund to shed 7.7% of its value during the sell-off from June 2015 through February 2016, the worst result of any in the short-term bond Morningstar Category. During that period, investors hit the road: The fund suffered 20 consecutive months of outflows totaling nearly $1.8 billion.

As the corporate bond market has bounced back since early 2016, so have this fund’s returns, and investors are once more piling in. The fund is sticking to its BBB corporate-heavy strategy, but with an investment team of five covering everything from corporate bonds to asset-backed securities to equities, we don’t think the fund has the resources to gain a research edge over the competition. Moreover, the fund remains vulnerable to suffering steep losses in another sell-off.

Nuveen High Yield Municipal Bond I (NHMRX)
Nuveen High Yield Municipal Bond has some compelling traits. It’s backed by one of the largest muni research teams in the industry, and we have enough confidence in the quality of the research and portfolio management at Nuveen to recommend some of this funds’ muni siblings, such as Bronze-rated  Nuveen All-American Municipal Bond A (FLAAX). Unlike its siblings, however, the risks that manager John Miller takes at this fund make it an outlier, even among the aggressive high-yield muni category cohort. Not only does the fund tend to have one of the largest stakes in below-investment-grade and nonrated bonds combined (typically 65% to 80% here), it also has had one of the longest durations in the category at times, makes liberal use of leverage, and runs significant Treasury futures shorts, a tactic that creates basis risk between muni and Treasury yields.

All of these techniques have turbocharged the fund’s returns and yield in favorable climates; its 5.4% 12-month yield as of September 2018 was the second-highest in its peer group, for instance. But they can also cause substantial pain during muni market sell-offs, as we’ve witnessed here in the past. The fund’s excruciating 40% loss in 2008 nearly doubled that of its typical peer, while its 10% decline following Meredith Whitney’s dire prognostications (October 2010 through January 2011) and 12% loss in the 2013 taper tantrum (May through August 2013), also ranked among the category’s worst. At $16.8 billion in assets, the fund is by far the category’s largest, and it took in nearly $8.0 billion of that total just since 2014. It remains to be seen how patient those investors are during future episodes of turbulence.

Loomis Sayles Senior Floating Rate and Fixed Income (LSFYX)
This bank-loan fund comes from good stock. Our confidence in Loomis Sayles’ corporate credit research acumen has supported Gold Analyst Ratings for a few of this fund’s siblings, including multisector bond fund  Loomis Sayles Bond (LSBDX) and intermediate-term bond fund  Loomis Sayles Core Plus (NEFRX). But while this fund also benefits from the firm’s seasoned bench of roughly 40 credit analysts, it has stuck to the aggressive end of its peer group since its 2011 launch. The managers seek to build a yield advantage over competitors by taking more credit and liquidity risk. It has held a larger stake in second-lien loans than most, for instance, which has contributed to an above-average CCC stake. The team is also comfortable holding smaller issues that come with more liquidity risk. Although the fund’s risks have been dialed down lately, its portfolio still looks bolder than most, which explains why the fund’s 5.7% 12-month yield is the category’s second-highest.

While the fund’s daring profile has been mostly successful so far, investors got a taste of the downside of this approach during the mid-2015 to early-2016 high-yield sell-off. The fund’s 6.9% loss during that stretch lagged more than 80% of its distinct peers. Absent a lengthier track record demonstrating otherwise, we’re concerned the fund’s struggles could compound during a more severe downturn.

Miriam Sjoblom, CFA has a position in the following securities mentioned above: LSBDX. Find out about Morningstar’s editorial policies.

This Is Why People Should…
“I Just Have to Choose…
The Three Non-Negotiable Do’s And…
The Happiest Couples Have Been…
Note To Self: You Deserve…
I Thought My Anxiety Would…
8 Reasons Why You Feel…
This Is What Terrifies You,…
5 Ways To Be An…
25 Things About Life, Friendship,…